A story of Halloween

Although Halloween is a tradition normally associated with the United States, in fact the festivities were imported by immigrants from Scotland and Ireland in the 19th century. The holiday, as you probably know, is connected with All Saint’s Day, which is celebrated across Europe and Mexico. However, since its arrival in America, Halloween has evolved considerably. What was once a religious tradition is now celebrated primarily as a day of fun and games for children. However, the scary, morbid spirit of the original holiday, known as “Samhain”, remains intact. 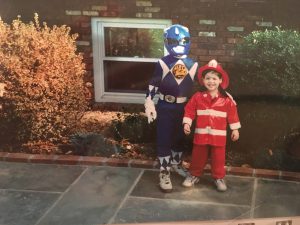 dressed up on the night of 31st October, walking around their neighborhoods and knocking on their neighbors’ doors. The idea is to fill up their bucket with as much candy as they can carry. After knocking, an adult opens de door and the children shout “Trick or treat!” The adult typically gives each child a handful of candy. Popular American Halloween candies include candy corn and caramel apples, which are eaten on a popsicle stick. Some of the older, naughtier children like to cover the neighborhood trees with rolls of toilet paper, as well as spray aerosol shaving cream bottles at each other. 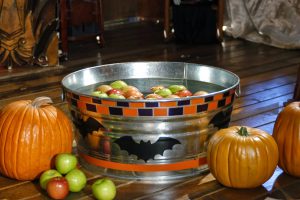 In addition to wearing scary costumes and “trick-or-treating”, some of the other homegrown American Halloween traditions are pumpkin-carving (to make “jack-o-lanterns”), scary movies, haunted houses, ghost stories, and even competitive games like “bobbing for apples”, where children must use their teeth to pick up apples floating in a bucket of water. These activities don’t only happen on 31st October, but for the whole month. 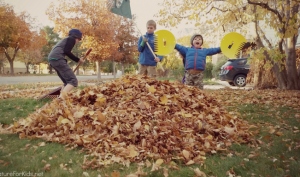 on the banks of the Hudson River about 50 kilometers north of Manhattan. In autumn, the leaves turn red, gold, and brown, and the air becomes crisp and refreshing. Branches snap, leaves crackle beneath your feet, and an eerie fog covers everything at dawn. At local apple orchards, residents like to have hot apple cider and homemade donuts while their children go apple-picking. At home, children are handed a rake and told to clean up the leaves that have fallen in the yard. After they rake the leaves into small piles, they jump in them, as if they were beanbags.

Croton-on-Hudson is just a few kilometers from another village named Sleepy Hollow, where the eponymous novel of American author Washington Irving is set. During Halloween in Sleepy Hollow, there are many spooky events such as cemetery tours, haunted trails, dramatic performances of “The Headless Horseman” set in front of the Old Dutch Church, and a haunted “hayride”.

The most impressive local event of all is The Great Jack O’Lantern Blaze, an electrifying Halloween event where over 7,000 individually-carved pumpkins are illuminated with candles and laid out across the Tappan Zee Bridge, creating a spectacular display over the river.

As you walk across the bridge, enormous sculptures of witches, spider-webs, dinosaurs, serpents, dragons, and even the Headless Horseman himself can be viewed by the attendees.

Halloween in New York’s Hudson Valley is an unforgettable experience.  It is about more than just scary costumes and candy – the feeling of Halloween is in the air, all around us, and makes October the most exciting time to visit my country.